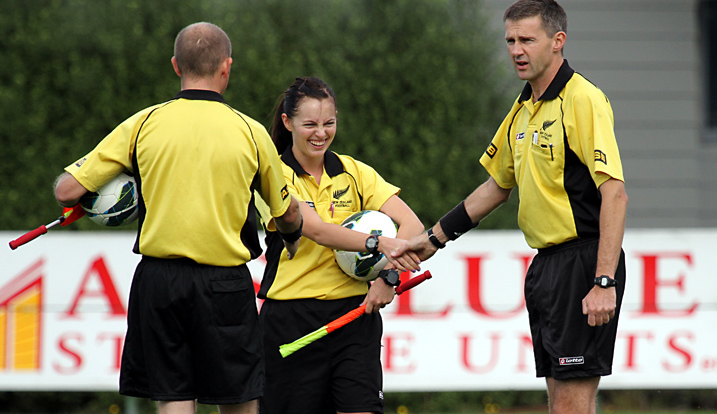 Football is the world’s most played and most popular sport. New Zealand fits the trend with more than 6.3 per cent of the adult population participating in the game, making it the most popular team sport in the country. There are over 135,000 participants across all strands but, while coaches and players are key to the game, so is another group – referees.

For referees in New Zealand there is a clear pathway to help you achieve your goals while contributing to the success and enjoyment of players, coaches and fans along the way.

THERE ARE 6 LEVELS OF NEW ZEALAND FOOTBALL REFEREE CLASSIFICATION:

A short introduction to the Laws of the Game for those interested in the way the game is officiated and who wish to learn a little more.

An induction course for those who wish to be available for appointment to a game. The course is essentially a ‘Refereeing 101’ covering the basic requirements to referee a game.

You can then officiate in youth and local senior football!

A field-based assessment. Candidates must demonstrate competency in eight areas, particularly relevant to fair play and the safety of players.

A more advanced accreditation course for those who wish to continue their development and referee at higher levels of the game. It includes a practical assessment on at least a Premier Reserve level game.

The door is now open to top federation and inter-federation leagues and, in some cases, national competitions like the Youth League!

A more extensive field-based assessment on two games at the highest federation level.

A course that qualifies candidates to referee at the highest domestic leagues and makes them eligible for nomination to international games.

You can now step up to the Premiership and National Women’s League!

A world of opportunities could also be unlocked with exceptional referees who achieve their FIFA badge assigned to international fixtures throughout Oceania!

After that, the world awaits, with FIFA tournaments including FIFA World Cups and Olympic games on offer for top officials!

Alongside the referee pathway, a similar road exists for assessors, who can impart their knowledge and experience to those at lower levels, either once they themselves have finished active refereeing or as they progress along the pathway.