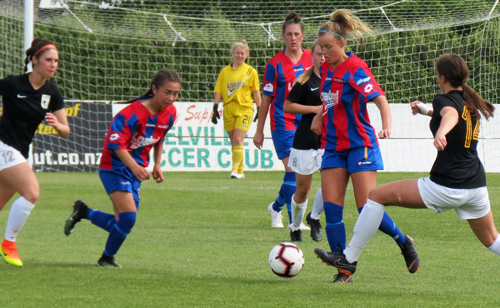 Capital kept their faint title hopes alive with a dramatic last-gasp win over Loaded WaiBOP, in a finish hauntingly similar to that of the reverse fixture between the two sides earlier in the season.

Leading by a goal nearing added time, the visitors struck an equaliser in the 89th minute then found their winner with their last kick of the match. WaiBOP could, quite justifiably, be wondering if they’ve done something to upset the football gods after being on the receiving end of such a heart-breaking outcome once again.

WaiBOP found themselves 2-0 up with only ten minutes remaining. Olivia Hooper had given WaiBOP a half-time lead for a WaiBOP side that had also seen Emma Cawte's early penalty saved by Capital custodian, Courtney Norman. The visitors struck the upright of debutant keeper Sophie Daly's goal just before the break.

After a second half in which Capital attempted to control possession while WaiBOP looked threatening on the counter, it looked like WaiBOP might have done enough to claim just a second victory. Shae Brady was put clean through, rounded Norman and slid the ball home to make it two late on.

But, with their slim title prospects on the line, Capital rallied and launched a remarkable comeback to break WaiBOP’s hearts yet again. Michaela Robertson made an immediate impact on her return to the side with a quick-fire double, bundling her first home then striking a sweet angled drive for the equaliser.

With five minutes of additional time then having ticked by, WaiBOP must have thought they would at least pick up a deserved point but were left deflated when Meisha Boone found the net with one of the last kicks of the game to somehow pull off an unlikely win for Capital.